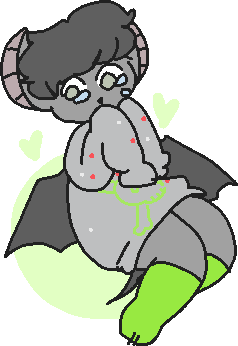 Not much is remembered about Georgie's past, if he has one. Mysticals are created from stray spirits -- both that had lives, and ones who never got to make it through childbirth for various reasons. These spirits are rarely troubled, usually being docile and complacent. Georgie is in the majority here.

He's been with his wizard since the wizard was 10; the average time for a wizard or witch to get their hands on a Mystical to bond with. This bond increases both Mystical ad wizard's powers. They lift each other up and are supposed to be mutually loyal. The Mystical is tied to their wizard through spiritual powers.

Thankfully, the wizard spoils Georgie considerably. Some may think that he is treated like a pet, but it's more of a father-son relationship if anything.

Georgie is dating the Mystical of the wizard's girlfriend, ironically enough.